The 10 Best David Ogilvy Quotes According to Brio 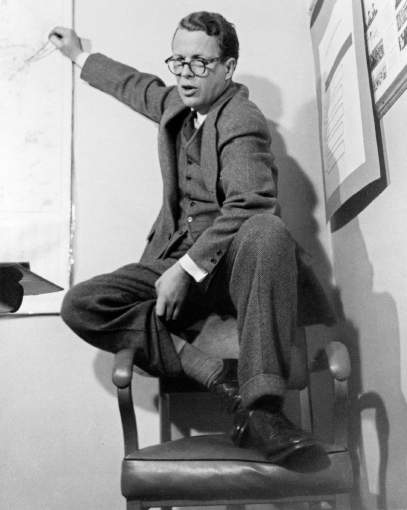 The 10 Best David Ogilvy Quotes According to Brio

David Ogilvy was a pretty smart dude. Often called the father of advertising, he’s responsible for some of the most successful advertising campaigns of all time – success he attributes to his meticulous research into consumer habits.

His philosophies on creativity and brand identity are legend, and many believe he is the inspiration for Don Draper, Jon Hamm’s character in Mad Men.

In addition to building a wildly successful advertising empire, he also wrote numerous books, each containing their fair share of pearls of wisdom. Here, we’ve collated a few of our favourite Ogilvyisms for your reading pleasure:

Try something daring. Listen to that bold idea desperately trying to get your attention from all the way in the back of your mind.

Here at Brio Group we’ve been known to come up with ideas that are a little zany, but you know what? These ideas get peoples’ attention. When you stand up and disrupt the status quo, when you make the choice to push across the stream instead of going with the flow, that’s when people take note.

“Big ideas come from the unconscious. This is true in art, in science, and in advertising. But your unconscious has to be well informed, or your idea will be irrelevant. Stuff your conscious mind with information, then unhook your rational thought process. You can help this process by going for a long walk, or taking a hot bath, or drinking half a pint of claret. Suddenly, if the telephone line from your unconscious is open, a big idea wells up within you.”

Stuffing your conscious mind, then unhooking your rational thought process – what an amazing image. I’m reminded of gluttonous visits to Sizzler back when I was a wee one, and my parents’ primary concern was no doubt capitalising on the unlimited food to finally satiate their hollow-legged children.

You’d take as many trips to the buffet as your insides could manage, piling your plate high with what was mostly just variously prepared forms of potato. Then, when you were about to burst you’d heave yourself out of the booth and loosen your belt a notch – no, two notches – just so you could comfortably breathe again. You’d trundle outside for a little digestive stroll around the block, then head heading home to no doubt immediately lapse into a carbohydrate-induced coma.

So dig in – hell, while we’re being gluttons, go ahead and pull your chair right up to the conceptual buffet. Cram all that will fit into your hungry mind. Then go and digest; take a stroll around the block with your belt loosened a couple of notches. Zone right out and wait for the magic to happen.

“The creative process requires more than reason. Most original thinking isn’t even verbal. It requires ‘a groping experimentation with ideas, governed by intuitive hunches and inspired by the unconscious.’ The majority of businessmen are incapable of original thinking because they are unable to escape from the tyranny of reason. Their imaginations are blocked.”

“The tyranny of reason” reads like a sucker-punch to the gut. And Ogilvy lived and worked before the era of automation and smartphones! If only he knew just how many foes creativity would have to overcome in the future.

One of many reasons to always carry a notebook is just this – it allows you to scrawl any number of half-baked, pseudo ideas as they start to come to you. This is also one of the main reasons I favour paper over digital. If an idea doesn’t seem immediately up to scratch it’s only too easy to lean on the backspace key for a few seconds and – poof! – it’s like the idea never happened. Who knows what gold lay in those first ugly musings, just waiting to be massaged and finessed?

“Every advertisement should be thought of as a contribution to the complex symbol which is the brand image.”

And on it goes – every word in every advertisement, and every hue chosen, and every image used. Each of these components are endlessly woven together to create the intricate tapestry that is your brand’s image.

Not every piece of communication has to say everything about your brand, but they do have to say the right things, to ensure they’re complimenting the collage of your brand.

Each of the wefts you add to this tapestry serve to create a rich, multi-tonal story for your brand, strengthening the Archetype chosen to best speak to your intended audience.

“You now have to decide what ‘image’ you want for your brand. Image means personality. Products, like people, have personalities, and they can make or break them in the market place.”

This is the power of Jung’s Archetypes, and why we believe in them so strongly. Like people, brand personalities are complex and multi-faceted. Each piece of communication you put out should stay true to this personality, building on that brand image layer by layer, fortifying its personality and the relationship with your intended audience. As David Ogilvy says, it’s make or break, so pay it the attention it needs.

“Take whiskey. Why do some people choose Jack Daniel’s, while others choose Grand Dad or Taylor? Have they tried all three and compared the taste? Don’t make me laugh. The reality is that these three brands have different images which appeal to different kinds of people. It isn’t the whiskey they choose, it’s the image. The brand image is 90 per cent of what the distiller has to sell.”

Ogilvy hits the nail on the head here. Perhaps my boorishness is showing, but for all intents and purposes, vodka is vodka – they all burn the same way going down. So why choose one brand over another? A wealthy businessman may see drinking Smirnoff as uncouth, and a trendsetting socialite may choose Absolut because Belvedere seems too snooty.

The Archetypes of these brands seek out different types of people and tell them what they want to hear. Lo, the power of a well-defined and finely tuned brand image!

If I see one more ad touting “the cheapest X in town” I’m going to scream. Way to further substantiate our fast fashion, disposable-everything culture, guys.

What kind of people are you seeking out, and what message are you sending them, if your number one Unique Selling Point is honestly that they don’t have to give you as much money as they do the guy next to you? Sure, you’ll get their business – this time. But is your goal to make one sale? Or is it to build a recognizable brand that people will go out of their way to choose every time, even if someone else is shrieking about how much cheaper their product is?

Remember: Your price is not your USP. If you’re really not confident enough in your product to focus on anything besides how cheap it is – well, my friend, there’s a bigger problem to tackle before you start advertising.

“Talent, I believe, is most likely to be found among nonconformists, dissenters, and rebels.”

It should come as no surprise that many of the brands we at Brio Group work with are Rebel Archetypes. Ones who shirk the ‘done’ thing and look outside the box for a better way – that’s where Brio lives.

Talent is, at its very core, an extraordinary trait; it is a step above the average, on the outside of the bell curve. Of course these people are nonconformists, of course they’re dissenters. Otherwise they’d be doing the same thing everyone else is, and getting the same results.

To be extraordinary is, by definition, to do what others do not.

“Don’t bunt. Aim out of the ballpark. Aim for the company of immortals.”

In the words of the illustrious John Green, “What’s the point in being alive if you don’t at least try to do something extraordinary?”

Why aim to scrape through? If you’re going to make the effort anyway, bloody well give it all you’ve got. To quote my favourite motivational YouTube video, “If you get a shot at greatness, make damn sure you take it.”

“Develop your eccentricities while you are young. That way, when you get old, people won’t think you’re going gaga.”

While not related to our industry per se, this is sage advice. And especially pertinent for us at Brio since, as the Chesire Cat would say, we’re all mad here.