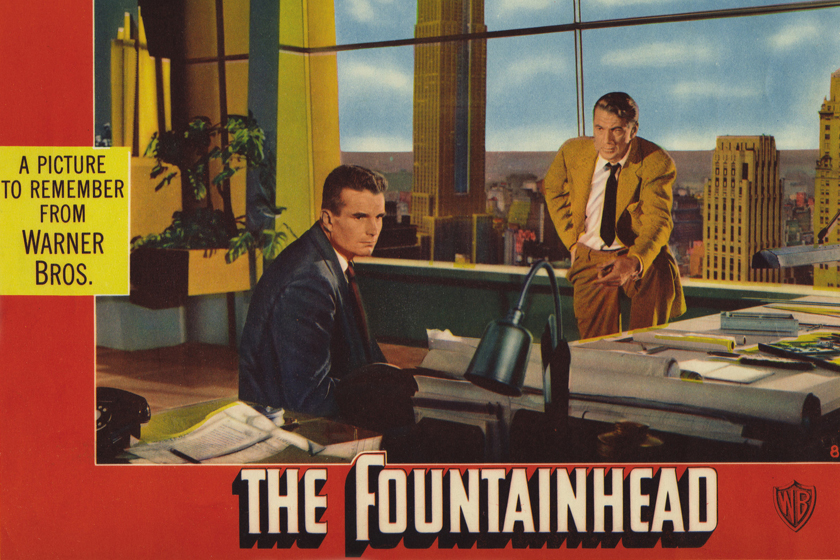 There is something about old movies that reminds me of the good old fashioned values (and manners) that may be a little lacking in today’s world!  Regardless, I love stories that get me thinking and there is always double points if there is a moral learning that I can also take away from having watched it.

The Fountainhead is a book written by Ayn Rand in 1943 and there was a movie created in 1949. The central character is Howard Roark, an architect who designs modernist buildings and refuses to compromise with an architectural establishment unwilling to accept innovation. What I took away from watching this film (as I haven’t read the book, yet!) is Roark’s dedication to individualism and his strength of character to stand up for what he believes in. (If only more of our politicians these days had more of these characteristics, but I digress!).

Roark is opposed by what he calls “second-handers”, who value conformity over independence and integrity. Watch this exert from the film below you will have your own experiences I am sure where something similar has happened to you.

I have found myself in this scenario many times over the years. I would present three concepts each with a rationalised strategic approach and the client wants to combine a bit of this one and a bit of that one. My designers use to have a term for it. They called it a ‘Frankenstein’.

There have been many many times in my career where I have refused to let the client create a ‘Frankenstein’ as the changes they suggested were based on their personal perceptions and even levels of conformity to what their competitors were doing. Their own personal values and bias would not allow them to be individual and deep down unconsciously they didn’t want to stand out in the crowd (which no-one in marketing can bare).  So what did I do when this happened?

Here are some things that I have learnt about compromise and what actions I took to overcome them, that you can use too.

Compromise is another word for mediocrity
Reaching agreements with other people is a valuable skill. To be able to negotiate and find common ground is demanding, but also rewarding. To reach solutions in which all parties feel satisfied, listened to and taken seriously is a major achievement.

But that’s not what compromise is. Compromise is about reaching a settlement, whether or not it feels authentic. Compromise is all too often about accepting an outcome that has lower standards than we want to accept.

ACTION: If you find yourself in a situation where you are being asked to compromise, it is best to have the difficult conversation straight away. Do it then and there is the meeting or call a meeting and discuss what you will do and what you won’t do. Remember no negotiating, no finding common ground, stick to your standards and work on a solution from this perspective. All of the work we spend our time doing, we wanted to be great, it really is a choice.

Compromise undermines our values
When you make compromises or say yes to projects against your better judgement your values suffer.

If you value excellence in design and you release something into the market that isn’t up to your standards, then it’s your standards that suffer. If you are involved in a project that has inferior values to the ones you live by, then you are supporting those inferior values. I had a friend say to me once (well it was many times until I got it!) “The standard you walk past is the standard you accept” meaning if you see where your values are being compromised and yet you take no action to remedy the situation, you are by default accepting that standard.

ACTION: We have to stay strong and say NO to projects we know are not in our value-set, just so we don’t offend or disappoint someone. The regret and resentment that follows is often much more difficult to unravel than the initial difficult conversation. And telling someone we can’t follow through on a promise is much harder than never making the promise.  Get clear on your values, share them with your team and live by them.

Compromise isn’t about listening and learning from others, it’s about giving in
This is not to say that we should become single-minded. Other people may have visions and perspectives we haven’t considered. Learning from others is vital.

Those with super-inflated egos or closed minds might claim they don’t compromise. But what they are actually doing is refusing to learn and grow. This isn’t what I’m advocating here and is something we need to get balance with, as I believe Rourke did well, in The Fountainhead.

Being open to new ideas and being able to take advice is a mark of humility and flexibility. But doing whatever anyone else wants of you or saying yes to everything that comes along is simply weak and unwise.

ACTION: It is important to listen and weigh the options, but know why you say ‘yes’ and ‘no’ and how each decision reflects your ideals, goals and values that you have for your agency.

Don’t agree to take on work or go down a route someone else suggests because it seems like the easiest thing to do at that time. That will only lead to resentment. I know, I have been there!

Compromise involves putting money before abundance
So often the reason for compromise is financial. We all have commitments, wages and bills to pay, but when we chase money first we tend to put our big goals on hold. When bills are calling, it’s hard to see any income as ‘the wrong money’, but short term gain can often add up to long term drudgery.

In The Fountainhead, Rourke had to work in a granite quarry to make some money after he had to close his business down. But he did that for a short time as compromising on his design was not an option. When at the quarry he met a journalist for a New York paper who later helps him share in the media his vision for modern design.

ACTION: Look at your client list and the projects you have been working on for them. How many of these clients are you producing work for that you are really proud of?  Sometimes a business needs to scale down in order to scale up again for even bigger success and personal reward.

An abundant life is richer and deeper than immediate monetary gratification. Quantity and abundance are not the same thing. An abundant life is one that is full of choice, knowledge, relationships, experiences… Money can be a great resource, but it’s not an end in itself and living for it, will force us into endless compromises.

Compromise makes you inconsistent
If we don’t live by values; if we compromise to please others, the result is that we will be inconsistent. Trying to be people-pleasers is a difficult and tortuous path. It makes us not stand for anything and worst of all we continually attract the wrong people to our business.

ACTION: When choosing which projects you want to do and with with types of clients you want to work with, use a criteria for excellence. Be clear on the outcomes you want to deliver, how you will measure that success for that client in the market, this all means that each project will not only excel, but people will understand what you are doing for them.

If you get it wrong and you do find yourself compromising and the result is work you are not proud of, look for the lesson. Where in the project did the compromise occur? What would you do differently next time? I have a saying “you are either winning or learning”. It is how we can continually improve.

Compromise is not how you want to be remembered
We each have the chance to leave a legacy. Being a people-pleaser can make us feel valued for a short time, but ultimately it’s likely to make us the people who are taken for granted and even more tragically, the people that become invisible and then forgotten.

We don’t have to be ruthless, single-minded people to avoid being compromisers. We want to be remembered for characteristics that are distinctive, generous and note-worthy, not because we always gave in.

ACTION: Know what you want to be remembered for. What difference are you making to the clients you are working with? What types of work do you want to do and be world leaders at?  In The Fountainhead, Rourke wanted to be an architect known for good modern design. In the end he was. There were challenges to get there, but in the end he got the accolades and the girl!  Life is too precious to compromise.